Exciting news – just published is our study on the effects of waterfront exposure and temporary urban design interventions on psychological restoration. Undertaken by a team at the University of Virginia in conjunction with Happy City and Street Plans Collaborative, this study is one of the few covering the emerging field of “blue health.” Blue health describes the phenomenon of improved health and wellbeing that people can derive from contact with water bodies including river trails and urban waterfronts.

Global studies have shown the positive benefits to mental health from contact with water. British adults reported greater happiness in water-rich areas rather than urban and rural settings. Canadian children aged 11–16 experienced increased emotional wellbeing from contact with the ocean, lakes, rivers, and streams. In yet another study, Spanish children aged 7–10 exhibited greater pro-social behavior and fewer emotional problems in proportion to the amount of time spent on a beach. Water, like parks and other greenspaces, can offer psychologically restorative benefits. Splashing droplets and the flowing patterns and movement of water bodies promote mentally effortless fascination via curiosity and wonder. According to Attention Restoration Theory (ART), this sense of fascination aids in our recovery from cognitive fatigue that results from constant, highly directed attention to complete daily tasks and decision-making. 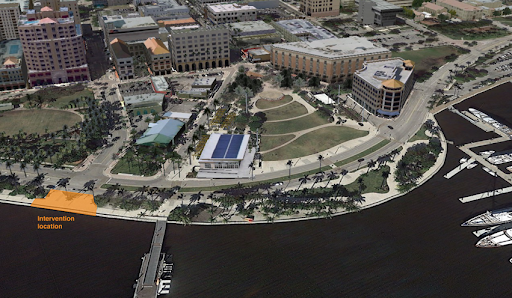 The urban context for the experiment: the waterfront of West Palm Beach, Florida. Image © Happy City

West Palm Beach waterfront provided the context for our study.  We planned a control scenario (waterfront walk ‘as-is’) and an intervention scenario (a waterfront walk with some simple urban design interventions). The intervention scenario consisted of a few low-cost additions that altered the environment for people’s comfort and enjoyment: window-like “fascination frames” which created guided views that connected participants with the aesthetic qualities of the waterfront, moveable chairs and tables, and bamboo planters that provided shade and some sound buffer from the adjacent roadway. In addition to fostering ‘effortless fascination’, these modest interventions were designed to promote a sense of “being away,” which also aids in cognitive relief. 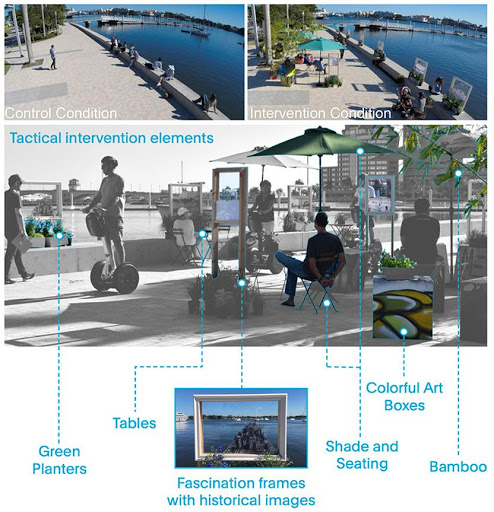 The team used validated and robust psychological scales to capture subjective wellbeing and the perceived restorativeness of the setting, while a smart watch (the Microsoft Band 2) was employed to track heart rate variability to measure physiological restoration. A total of 23 people between the ages of 25 and 45 participated, with roughly equal numbers of men and women and a predominantly White Caucasian demographic. We hypothesized that the sense of wellbeing would be greater in the intervention scenario owing to increased levels of comfort and fascination.

After the experiment, participants reported increased levels of fascination and a greater sense of “being away” in the intervention scenario. Additionally, levels of stress reduction were greater in the intervention scenario compared to the control (as-is) scenario. This was evident for levels of subjective stress and physiological stress (although the latter was only of marginal significance in this small participant study).  Though the control scenario was safe and well paved to begin with, the modest interventions appeared to make the walk more pleasant and comfortable to participants while piquing their interest in their surroundings.

The implications of the results are compelling. The interventions were not costly, and though they seemed to be small gestures, they had a significant influence on stress reduction. We recommend that tactical urbanism is used more to test out strategies for increasing wellbeing in a city prior to full infrastructure change.  More studies on the power of “blue spaces” are also needed to support the findings presented here. Nevertheless, urban planners and public health advocates can use the knowledge gleaned here to take full advantage of underused, underperforming, or otherwise neglected water spaces in a city.