We previously wrote about studying emotive responses in older people through research conducted in Edinburgh, Scotland. Not mentioned in that post was the novel and strategic effort to assess and evaluate the raw electroencephalography (EEG) neural signals for real-time transitional walks between different urban environments. Studies in the field of environmental psychology are typically constrained to the lab environment, using 2D photographic imagery and fMRI machinery. However, with technological advances, we now have access to wearable neural headsets that allow for brain wave measurements in real-life settings.

While the mobile device used for the Edinburgh study, Emotiv, has its own proprietary classifications of mental state (‘frustration’, ‘excitement’, ‘engagement’, ‘meditation’ and ‘long term excitement’), we were interested in how these terms could be correlated with specific EEG frequency bands. Think of these bands as our ‘neural signatures ’ – pulses of electrical activity that surge through the brain and work a bit like a radio. Just like how a radio receives waves and converts them into music or speech, brain waves oscillate in discrete frequency bands and are classified into bandwidths which indicate a unique rhythmic signature (or musical note). The slower frequency waves (alpha) indicate when we feel relaxed; higher frequency waves (beta) indicate when we’re more wired and alert. Of particular interest in our study was whether we could detect specific changes in neural signatures (i.e. for alpha, low beta, and high beta electrical brainwaves) in particular urban places. 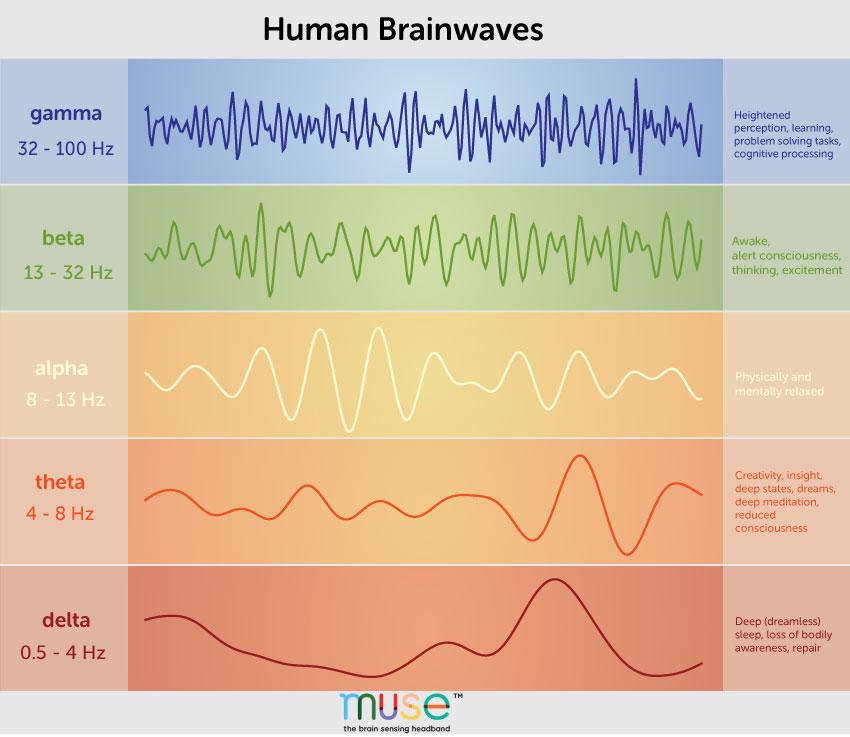 Brainwaves reveal mental state and a correlation to level of stress or engagement with one’s surroundings. Image source: https://choosemuse.com

The question we posed was, What impact does transitioning between different urban environments have on brain activity as measured by alpha and beta waves?   The urban environment types used for this study were urban green (a park), urban busy (a commercial street), and urban quiet (a residential street).

The headset data revealed lower levels of beta activation in the urban green setting, suggesting reduced demands on attentional capacity and a restorative effect of the green setting consistent with Attention Restoration Theory.

We can see this pattern in the image below, showing changes in beta waves for one participant:  the top row captures beta waves whilst walking in the park, while the bottom row shows brain activity in the urban busy setting.  The warmer a colour (red being warmest), the more activation of beta waves at that site. The cooler colours (dark blue being coolest) refer to decreases in activation. A greenish colour refers to change of no considerable note.  Simply put, you can see increases in frontal activation in beta waves in the urban busy walk (at the edge of the circle, the point of contact with the headset’s electrical node). This activation may be explained by the relative increase in attention that may be required due to features of the walk such as traffic, pedestrian volume, and noise. 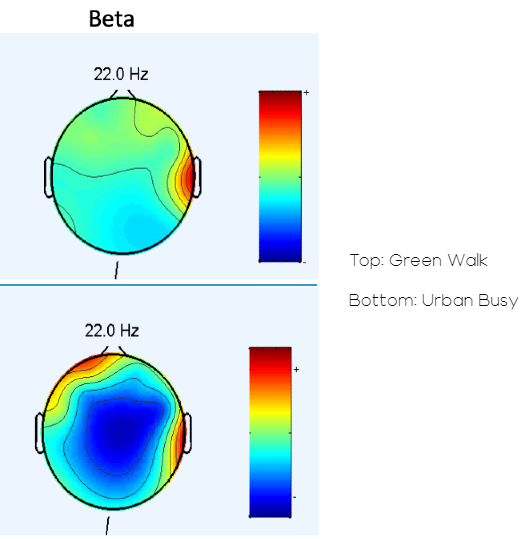 A scan of one participant walking in our study: the red areas indicate higher beta activation in the urban busy location. Image source: author

But some of our findings were quite surprising and ran contrary to our hypotheses. For example, we found no significant differences in brain activity between the park and quiet residential setting, suggesting that the magnitude of environmental contrast between an urban busy context and other environments is an important factor in understanding the effects of the outdoors on brain activity. We also speculate that familiarity with route typologies (e.g. quiet residential streets) may affect levels of vigilance and alertness. Only the routes that had an urban busy segment showed meaningful differences in brain activity between settings.

The possibilities are endless and exciting. This study has only just begun to open the door to new research avenues in environmental psychology. What other impacts to stress levels can be identified and tested through mobile EEG readings? How might these results differ from lab-based measurements, and why? Side-by-side comparisons could be very enlightening.

You can read the full study here.